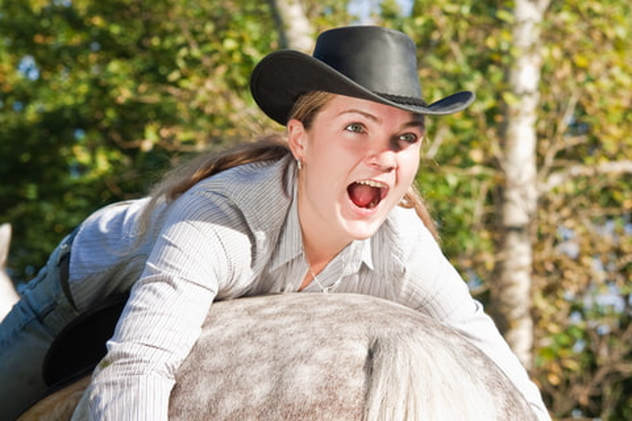 How To Overcome Your Fear  of Riding

Sometimes fear of riding has nothing to do with riding. It is toxic fear that's rooted in other problems in your life.

There are many articles out there that talk about how to get over fear of riding when you've had a scary experience—gotten bucked off a horse or suffered a fall. But there is a different kind of fear that also can prevent you from riding, and it often has nothing to do with riding. It is called toxic fear, and it can pervade other areas of your life besides riding.

I went through a period of toxic fear of riding many years ago. It lasted several months. I forced myself to ride anyway. But every time I got on a horse, I felt overwhelmed with panic. I was sure the horse would run away with me or that something else would happen that I wouldn't be able to handle. Every fiber in my being screamed, "This isn't safe! Get off now!" Even though nothing bad ever happened, and my riding skills were strong enough that I could handle just about anything might happen.

Not only was I afraid of riding, I also became afraid of flying. That was a real problem because my job required me to travel to conferences and other places where I was invited to give talks. Again, I forced myself to go but I white-knuckled it the entire flight.

With the help of a therapist, I worked out the problem, and it had nothing to do with riding or flying. It was a combination of problems with my then teen-aged daughter and an upheaval at my job because of the 2008 economic meltdown. I felt completely powerless and out of control in both areas. My brain apparently decided to attach those feelings to something things that could pose a physical (as opposed to an emotional or financial) threat—getting on a 1,200 lb animal or an airplane.  Riders who have lost a loved one, suffered a humiliating defeat at work, undergone a divorce, or suffered situations that were deeply threatening emotionally can find that they suddenly and inexplicably become afraid of riding.

In my case, talking through the problems with a therapist helped, as did a truly strange technique called "tapping". I'd focus on the arguments I'd had with my daughter or the fear of losing my job and then tap in the way the therapist instructed me to do. The result was immediate and amazing. It was like some short circuit in my brain got fixed. I also learned to meditate using the "mindfulness" technique.

In my experience, there are four other common reasons why people develop a toxic fear of riding:
You can read more about those here.