A reader asked, “Are the horse breeds of Roman times related to modern horse breeds?”
The answer turns out to be yes.

A new DNA study reported in the scientific journal Current Biology found that nearly all modern horse breeds can be traced back to two ancient Middle Eastern lines, Arabian horses from the Arabian Peninsula and the now-extinct Turkoman horses from Eurasia.  These horses were brought to Europe about 700 years ago, and were enthusiastically embraced by European breeders and trainers for hundreds of years. European horse breeders found that stallions from these equine lines produced more desirable offspring. Today, the offspring of these ancient horse breeds form the backbone of nearly every modern horse breed, including Thoroughbreds, American Quarter horses, German draught horses, and Appaloosas.

Archaeological evidence (including bones, statues, and ancient riding equipment) show that the horses ridden by the Romans were small by modern standards, measuring between 13 and 15 hands. The average Roman soldier stood about 5’7” tall.

One distinct breed, known as the Maremmano of Lazio, Italy, were favored in ancient roman, and often served as the mount of Roman emperors. Their distinctive characteristics include a strong build, a broad chest, thick manes and tails, and robust legs. This brief video shows what these horses look like and how they move.

All modern Thoroughbred horses trace back to horses imported to England under the reigns of James I and Charles I. These horses included forty-three mares, and three stallions the Byerly Turk (imported in 1689), the Darley Arabian (after 1700), and the Godolphin Barb (about 1730).  A General Stud Book was begun which listed only those horses that could be traced back to the Royal Mares in direct line, or to one of three stallions.

White Horses Are Born Dark. What Makes Them Turn White?

Why We Mount and Lead Horses On The Left

Lethal White Foal Syndrome: What You Need To Know

Who Is The Leader Of The Horse Herd, Stallion or Mare?

If A Throroughbred, Arabian, and Quarterhorse Raced Each Other, Who Would Win? 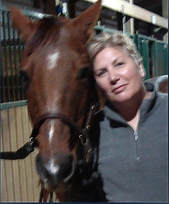