Richard was consistently scoring in the mid- to upper-60's in Training Level dressage, so he decided it was time to try First Level. As he looked over the first test, his first thought was, "There are so many figures and transitions! How do you fit them all in?"
At First Level, the circles are smaller than at Training Level, the serpentines must be ridden as smoothly connected EXACT 10-meter half-circles, lengthenings must be clearly visible, and the transitions between movements must timed precisely because there isn't a lot of time in between one movement and the next. Mess up the timing of one transition and you'll play catch-up for the rest of the test.
But first, let's see what a great First Level Test looks like. I've chosen a YouTube video of a lovely horse-rider pair who execute their First Level Test with ease, harmony, and clarity of movements. Notice that the horse is NOT a big warmblood with flashy movement who has been bred for the sport. I've done this on purpose because Training through 2nd Level dressage can be used to improve any horse's strength, agility, and way of going. Your horse can do this, no matter what age or breed.
Now for the nitty-gritty details that can win you or cost you major points.

1. TRANSITIONS: Foy points out that First Level riders must focus on the quality of transitions in and out of every movement. For example, there should be a clear transition from working to extended trot or from working canter to extended canter. The best way to do this is to begin setting up your transitions well before the letter at which the transition occurs. For example, downward canter transitions should be developed 12 meters before the letter at which the transition should occur. (There are exactly 12 meters between every letter in a 20 X 60 dressage arena.)

Keep in mind that upward and downward transitions have their own scores in First Level. The most common error occurs when riders try to transition from extended canter to working canter. Most try to influence their horse's movement by hauling hard on the reins. That makes the horse brace against the riders hands, raise his head, and lose his fluid motion and rhythm. This happens because they don't understand how to do a half-halt. As Maryal puts it,
“This movement tests whether the horse is really balanced and truly on the aids,” “The problem is that there is way too much ‘hand riding’ at First Level,” Lois adds. “Riders often think that pulling back on the reins constitutes a half-halt. The more the rider pulls back the more crooked the horse gets and the higher he gets behind.” More about how to execute an effective half-halt here.
2. CHANGE OF CANTER LEAD THROUGH TROT: Make sure your horse is straight. Trot 3-5 steps centered over X, then canter.
​ 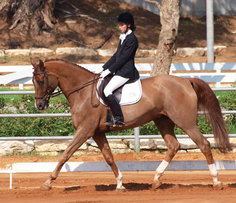 ​4. LENGTHENING. The horse is supposed to lengthen her stride when doing extended trot and canter, but judges say too often the horse simply changes speed. According to Lois “Whenever I see this happen in the test I say ‘conflicting aids,’ which means the rider has the gas and brakes on at the same time. When you lengthen a gait, the frame needs to lengthen as well. If a rider is holding on to the horse’s head, the horse will be crooked. And crookedness with energy creates speed because the legs won’t be pushing evenly. If the frame is open and balanced, and the rider adds energy, the horse will have the correct throughness to lengthen.”

Walter Zettl describes it this way: The horse's nose should reach forward so that the front legs can reach forward. That means you must allow the horse's neck to stretch forward, and you do that by pushing your hands forward toward the horse's nose slightly. If your horse truly accepts rein contact, she will stretch forward to reestablish contact with your hands when you push them forward. As a result, she lengthens her body and hence her stride. You can help her lengthen her stride by applying gentle pressure with both legs slightly behind the girth. Use a driving seat, as though you’re scooping the back of the saddle toward the front of the saddle. 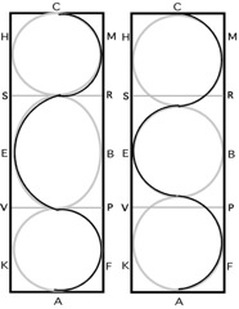 5. SERPENTINES: Serpentines MUST be three smoothly connected 10-meter half-circles. A 20 X 60 dressage arena consists of exactly three twenty meter circles, and each loop of the serpentine must trace half of each of these circles. The horse must change the bend in his body as he prepares to change direction.

The problem is that even at first level, many riders still don't have a clear image in their minds of the geometry of the arena. As a result, their serpentines end up being asymmetrical.

Often, riders here are still using RSVP in the middle of the dressage arena as guides, so the middle half-circle in their serpentines are enormous while the top and bottom half-circles are tiny. A serpentine is comprised of 3 ten-meter half-circles, and the horse must change the bend in his body as he prepares to change direction.

The way to think about this is that when you start the serpentine at C, you and your horse will be facing the long side of the arena. Your horse must bend his body around your inside leg in order to ride the half-circle. To do that, you apply pressure at the girth with your inside leg and gently squeeze the inside rein, while simultaneously keeping a firm outside rein (so his neck doesn't bend too much), and a firm outside leg behind the girth (so his haunches don't swing to the outside, causing his body to straighten.)

The 2015 USEF Dressage Tests can be found here.

*Judge commentary taken from the April 2010 and 2013 issues of Dressage Today, and from an interview at Horse Channel.