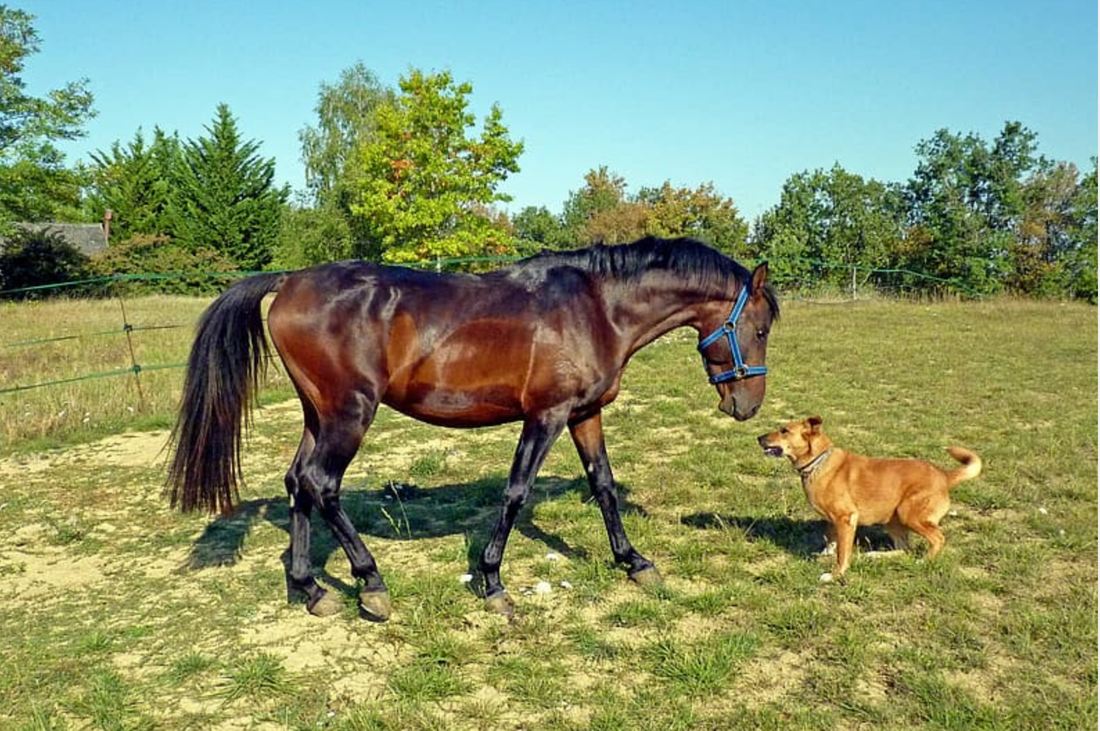 Horses and dogs use the same facial expressions and behaviors while having fun.

A dog invites other dogs (and humans) to play using a play bow: Jutting the front legs out in front, raising the butt, wagging the tail, and “smiling” (pulling the lips back while opening the mouth and sticking out the tongue). All of this means, “Let’s play!”

If another dog accepts the offer, the two dogs play together. They chase and leap and box each other, matching each other’s moves.

Now scientists report for the first time that dogs and horses play together the same way, using the same expressions and behaviors.

The most interesting thing is that these two very different species also rapidly mirror the expression on the other’s face, a behavior called rapid facial mimicry. This phenomenon has been observed among primates, domestic dogs, meerkats, and sun bears, but has never been documented between play partners of different species.

How did scientists discover this? In 2018, Elisabetta Palagi, an animal behaviorist at Italy’s University of Pisa, received a YouTube link from a student showing a dog and horse playing together. To you or me, that think, “How cute! Look at them playing together!” Fun to watch, but not really that surprising. But to an animal behavior scientist, that video was very surprising.  “I realized they were in sync,” says Palagi.

Intrigued, she decided to take a rare scientific look at play between the two species. Palagi asked her students to search YouTube for similar videos of dogs and horses playing with certain criteria: The animals had no interference from people, were free to move, and were engaged in a play session lasting at least 30 seconds. Over the next three months, Palagi and her students analyzed hundreds of videos, and finally selected 20 that satisfied those stringent criteria. Here is one of them:
Palagi points out that this king of cooperative play between dogs and horses is surprising given that dogs are a predator species and horses are prey. Why would they be playing together? One explanation is that thousands of years of domestication by human gave these very different species plenty of opportunities to develop this kind of cooperative play.

The study was summarized online April 16, 2020 by National Geographic.
You can find a more fascinating horse facts here!

You can read a review of the best dog car hammock here!

Fabric softener is toxic to dogs. Here's what to use instead.
Happy riding!