One Picture Explains Why Horses Spook

This illustration, taken from the excellent book, Human Brain, Horse Brain by neuroscientist and equestrian Janet Jones, shows exactly why horses are more likely than humans to spook at something they see. 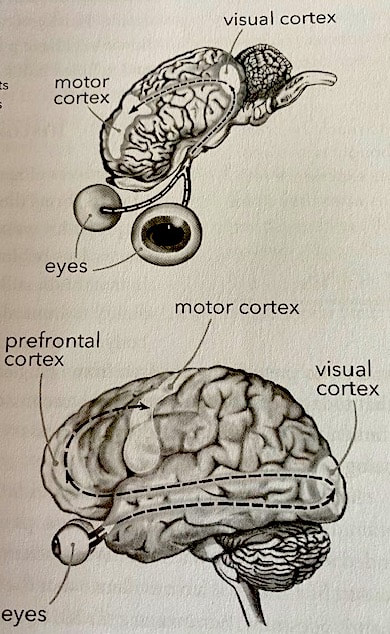 First look at the illustration of the human brain.

When you look at something, your eyes send signals to your brain. These signals travel a pathway that leads to the back of the brain, then loops forward to the front of the brain, and then finally to the top middle part of the brain called the motor cortex. The back part of the brain (occipital lobe) processes the perceptual aspect of the signals—shape, color, movement, etc. As the signal loops back toward the front of the brain, other aspects of the scene are processed—what the objects are, where they are located in space, and what they mean. The signals then are processed by the front part of the brain (prefrontal cortex), which is the brain’s executive decision-maker. Once the executive has made a decision about what the thing is and what to do about it, it sends a signal to the motor cortex, and your body reacts—move, duck, walk toward, and so on.

Now look at the illustration of the horse brain. Notice that the equine eye sends signals to the back of the equine brain, just like the human brain does. But notice that when the signal loops back around toward the front of the brain, it goes straight to the equine motor cortex—and the horse’s body reacts.

In other words, horses typically don’t think much about what they see. Instead, they react to what they see. And given that they’re prey animals, their primary reaction is to flee. Much better to run away first and think later.

And that is why horses tend to be prone to spooking at “imaginary” scary things.

You can read a review of the best dog car hammock here!

Fabric softener is toxic to dogs. Here's what to use instead.
Happy riding!